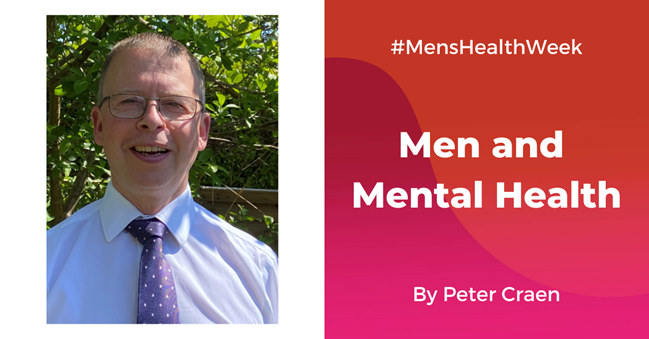 So, here are the facts… although as with many mental health statistics, it’s hard to know if the figures really represent what is happening. They can only tell us about mental health problems that have been reported – many cases may go undiagnosed. This may be especially true when it comes to men’s mental health.

My story: The Edge of Darkness

I can remember the day as clear as if it were yesterday. I was working as a management consultant and was in a client meeting when I became overwhelmed by a sense of despair. I thought I was going to burst into tears in front of colleagues and clients.

I made my excuses complaining that I had a migraine and left the meeting – no loss of face there!

As soon as I got in my car to drive home, I burst into tears – uncontrollable. It felt as if the whole weight of the world was on my shoulders but I continued to drive home as I just wanted to be somewhere safe and go to bed and pull the duvet cover over my head and sleep.

I was in a right state when I got home and my wife asked what on earth was wrong – all I could say that I was feeling sad and that I had this overwhelming feeling that something was going to happen, not necessarily bad but that I was waiting for something to happen.

My wife said I needed to speak to someone but who? I didn’t want to admit to what had just happened – I wanted it all to go away. There had been no warning signs – nothing bad was happening in my life. What did I have to be sad about!

I reluctantly called my GP. I got an appointment the same day. I was scared. What was I going to say to him? When it came to it, I just blurted out what had happened, and he just said you need help. He referred me to a therapist who in turn referred me to a psychiatrist. This happened over several weeks. In the meantime, I still had the feeling that something big was going to happen, but it never did.

I still felt sad until I sat down and opened up to someone independent, neutral, safe and it felt good.

I am still on a journey – still taking each day as it comes – so why am I telling you this? Because it’s ok not to feel ok. It’s ok to ask for help. It’s ok to share your feelings to a complete professional stranger or anyone for that matter.

Why did this happen to me? Because I bottled things up and thought that I had to “man up” – stiff upper lip and all that – I was burning out from the inside out.

If you feel or have felt like this, there are people around who you can talk to. It’s good to talk about your feelings. It’s good to share honestly how you are feeling with your mates.

Finally, it’s a cliché I know but those that mind don’t matter and those that matter don’t mind.

The Growth Company is an award-winning, not-for-profit social enterprise with a mission to enable growth, create jobs and improve lives. We provide individuals and businesses with a wide range of services that improve employment, skills, investment and enterprise for the benefit of all, and have been working in the Greater Manchester city region for more than 30 years.

This project receives funding from the European Social Fund as part of the 2014-2020 European Structural and Investment Funds Growth Programme in England.

The Department for Work and Pensions is the Managing Authority for the England European Social Fund programme.

With over 20 years of experience in the field of business and innovation, Skills for Growth - SME Support's Business Change Specialist Peter Craen is a much valued member of the team and has proven to be a creative and understanding support for SMEs in Greater Manchester.